BMW Motorrad AG is the motorcycle business unit of the German car manufacturer BMW Group, forming part of the Corporate and Brand Development division. This division was created in 2007, although the manufacture of motorcycles by BMW dates back to 1923 with the R 32. Already then the twin-cylinder Boxer motor layout was adopted, which it still maintains today, along with other configurations.

The 80-year history of BMW Motorrad dates back to the end of the First World War, when the Treaty of Versailles forced the company BMW AG to suspend the production of aircraft engines. However, BMW is escaping this impending crisis through a flexibility-oriented corporate policy.

In 1923, after developing and building a Boxer engine for other companies, chief builder Max Frizin created the first BMW motorcycle in just five weeks. The R 32 is presented in the same year at the Berlin car show. This innovative model is all the rage due to the transverse flat engine on a double tube chassis, in order to improve air cooling. This system ensures that power is transmitted directly to the wheel via a cardan shaft – a design principle that is still used in BMW motorcycles today.

Below is a timeline of the details that have marked the success of BMW Motorrad throughout its 80 years.

1924 Rudolf Schleicher, BMW Chief Test Engineer, develops the first 16 hp sports engine used in the R 37. Franz Bieber wins the first German Championship representing BMW with this machine.
1925 The year of the first single-cylinder BMW motorcycle, displacing the 250cc R 39 with a maximum capacity of 6.5 hp.
1926 Rudolf Schleicher wins the gold medal in the Six Day Test in Great Britain.
1927 The R 62 and R 63 appear as the first 750cc BMW motorcycles. This engine retains the position of the largest engine in the series until 1973.
1929 At the helm of a 750cc BMW on the Ingolstädter Landstrasse road near Munich, Ernst Henne sets a new world motorcycle record: 216.75 km / h or 134.39 mph.
1931 BMW faces the global economic crisis with the 250cc R 2, with extremely successful sales on the market.
1933 The BMW team wins the first International Six Day Test.
1935 On the R 12 and R 17, BMW introduces the first telescopic front wheel fork with hydraulic shock absorber. These forks not only cushion the bumps of a bumpy road, but also ensure that the wheel stays in contact with the ground, greatly increasing rider safety. For all the above, that same year, the number of motorcycles manufactured by BMW exceeded 10,000 units for the first time.
1936 Production of the new BMW R 5 begins, for the first time in history with an electrically welded tubular chassis using a safe welding method in an inert atmosphere.
1937 At the helm of an aerodynamic 500cc BMW, Ernst Henne sets a new world speed record: 279.5 km / h or 173.4 mph.
1938 The 100,000th BMW motorcycle is handed over to its proud owner.
1939 After his victory in the European Championship the previous year, Schorsch Meier – driving a BMW racing model with a compressor – wins the Senior TT race on the Isle of Man, the most famous and demanding motorcycle race in the world. His British-born running partner, Jock West, finishes second.
1942 Production of the R 75 military motorcycle with sidecar steering wheel drive moves from Munich to Eisenach.
1945 Production of the R 35 begins in Eisenach under Soviet administration.
1947 Schorsch Meier wins the Second German Championship after his first title in 1938. He repeats this series of successes as a pilot of BMW models in 1948, 1949, 1950 and 1953.
1948 With the introduction of the 250 cc single-cylinder R 24, BMW again starts motorcycle production in Munich.
1950 Launch of the R 51/2 as the first post-war BMW Boxer model.
1952 BMW manufactures the BMW R 68, an exceptionally fast motorcycle, capable of reaching 160 km / h. This 600cc 35hp motorcycle sets a new standard for international motorcycle manufacturers.
1954 Wilhelm Noll and Fritz Cron bring home the first World Championship medal in the sidecar category in a BMW RS.
1955 BMW launches the R 26, R 50 and R 69 with a new full swingarm suspension.
1960 With the power of a 42 hp 600cc Boxer engine, the new R 69 S reaches a top speed of 175 km / h or 109 mph.
1969 The production of BMW motorcycles moves from Munich to Berlin and the creation of the new models makes its debut on the market with the R 75/5 machine, the best in the series.
1973 Increasing the size of the engine for the first time, the Company launches the R 90/6 and R 90 S. 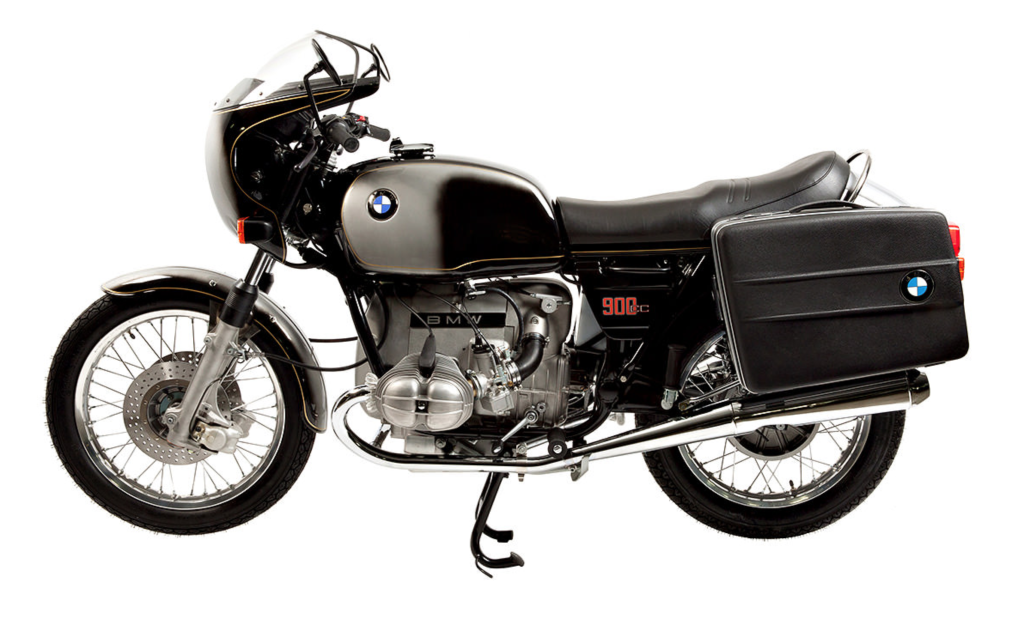 1974 At the helm of a BMW RS, Klaus Enders wins the Sidecar World Championship for the sixth time. BMW wins the recognition for the manufacturer in this competition 20 times in a row.
1976 With the introduction of the 1,000cc R 100 RS, BMW launches the world’s first series-production model with a full fairing.
1977 The R 45 and R 65 crown the model series. For the first time, the annual production of BMW motorcycles exceeds 30,000.
1980 At the command of an 800 cc BMW, Rolf Witthöft wins the European Championship “European Off Road Championship”. The series production version of the Enduro is launched with the R 80 G / S model, with a BMW design of the rear wheel suspension with a single swingarm type shock absorber.
1981 Hubert Auriol (F) wins the Paris Dakar Rally in a BMW Enduro. 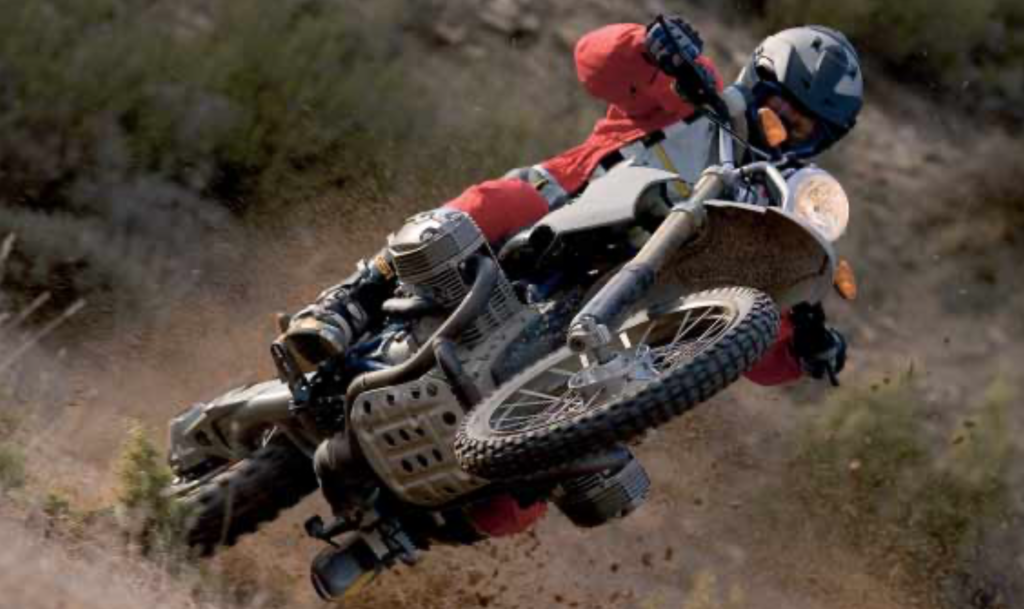 1983 At the 1983 Paris Motor Show, sixty years after the launch of the R 32, BMW once again demonstrated its competence in the world of two wheels with the presentation of the first tetra cylindrical BMW, the K 100 Series. Installed On a three-dimensional chassis, the compact drivetrain connects the brand new 1,000cc water-cooled horizontal four-cylinder with the transmission, cardan and swingarm fork. Hubert Auriol wins once again the Paris Dakar Rally with a BMW.
1985 Launch of the first three-cylinder model K 75. After his first victory in 1984, Gaston Rahier (B) wins his second title in a BMW at the Paris Dakar Rally.
1986 In response to high demand, the R 100 RS and R 100 RT (now with a Monolever-type single swingarm) are once again part of the BMW model series.
1987 Introduction of the most powerful Enduro on the world market: the BMW R 100 GS with the first single double-link swingarm on the rear wheel, the BMW Paralever.
1988 BMW becomes the first motorcycle manufacturer to introduce the anti-lock braking system in the K 100 models. With sales of up to 5,865 units, the R 100 GS is the best-selling motorcycle in Germany.
1989 The BMW K 1 features a special aerodynamic sports fairing and a 16-valve engine with Motronic digital engine electronics. 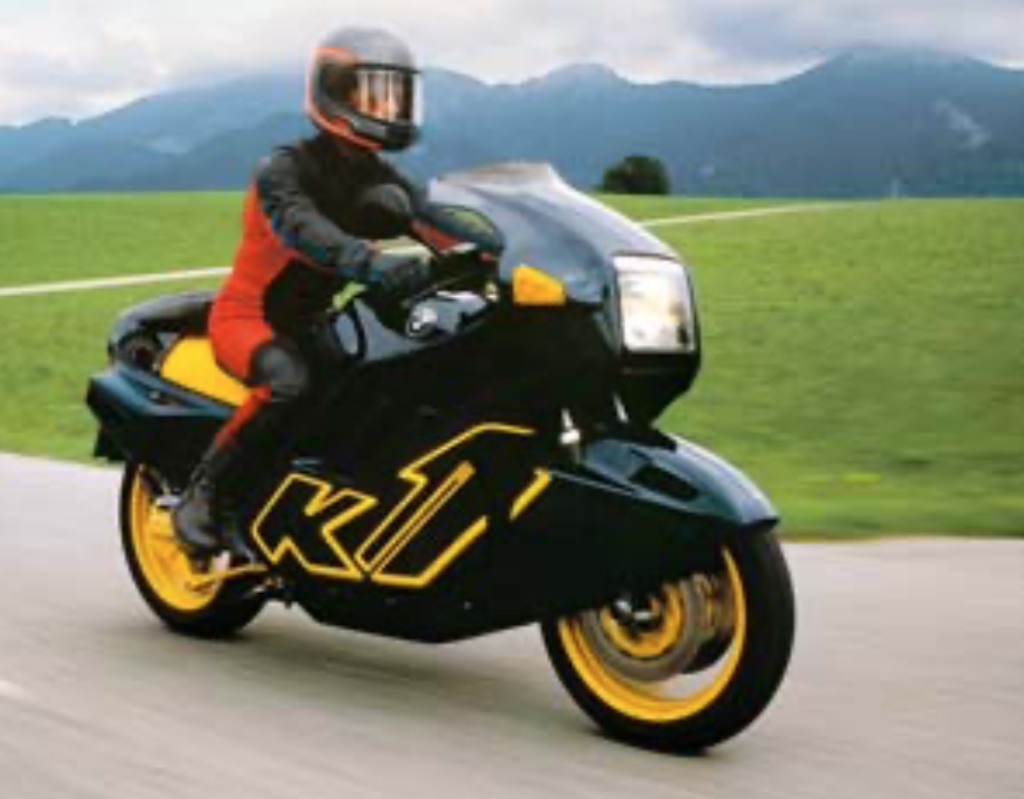 1990 BMW speaks out in favor of protecting the environment, introducing the catalytic converter for motorcycle engines. Motronic hit the ground running with the first fully controlled three-way catalytic converter on motorcycles entering series production in 1991.
1991 The K 1100 LT becomes the first BMW motorcycle with a capacity of more than 1000 cc. The 1,000,000th BMW motorcycle since 1923 rolls off the assembly line in Berlin.
1992 At the helm of her standard BMW R 100 GS, Jutta Kleinschmidt wins the women’s cup at the Cape Town Rally after covering a distance of 12,700 km or 7,874 miles.
1993 The BMW Boxer celebrates its 70th birthday with the R 1100 RS as the first model in the new generation of boxer engines with multi-valve technology and digital engine electronics. The front wheel is controlled by means of a Telelever – a combination of telescopic fork and swingarm – which guarantees a higher degree of safety and comfort. Optional extras include a computer controlled catalytic converter and advanced ABS. In subsequent years, the boxer series will be expanded to accommodate off-road models.
1994 The R 1100 GS Enduro and the R 1100 R Roadster as well as the R 850 R crown the series of the new BMW Boxers. BMW opens its Enduro Park in the small German town of Hechlingen.
1995 The new R 1100 RT Touring Boxer is ready for market introduction. BMW Motorrad builds 100,000th machine with ABS. For the first time, the Company sells more than 50,000 motorcycles in one year.
1996 Production of the two-valve Boxer ends with the R 80 GS Basic and the special Ultimate version of the K 75. With a maximum capacity of 130 bhp, the new K 1200 RS is BMW’s most powerful motorcycle to date.
1997 The first BMW cruiser, the R 1200 C, is unveiled in the USA. For the first time, the Motorcycle Division of BMW AG reports sales in excess of DM 1 billion.
1998 Presenting itself as the sportiest and most dynamic Boxer machine for the road, the BMW R 1100 S enters the market. At the “Munich Intermot Show” motorcycle exhibition, BMW creates a new milestone on the market with the K 1200 LT.
1999 Richard Sainct (F) wins the Paris-Dakar Rally with the single-cylinder rally version of the BMW F 650. The standard R 1150 Enduro gets a larger engine and six-speed gearbox.
2000 Four BMW machine drivers finish in the top four of the Dakar Rally – Cairo. The new F 650 GS and the highly innovative C1 two-wheelers enter the market. BMW becomes the only motorcycle manufacturer in the world that supplies all its models with G-type catalytic converters and ABS. Schorsch Meier, the legendary BMW motorcycle racing driver, passes away at the age of 90.
2001 Equipped with BMW’s unique comprehensive ABS system, BMW motorcycles simply offer better brakes. The production figures in Berlin are increasing at such a speed that an investment of 117 million Euros is made to achieve large expansions in the Plant. Both the Tourer and the Sports Tourer and the new Roadster are equipped with a 1,150cc Boxer engine. The F 650 CS, the highly agile Scarver for road use, enters the market.
2002 Second international season of the “BMW Motorrad Boxer Cup”. The R 1100 S Boxer Cup Replica for road use is introduced to the public and both the K 1200 GT dynamic tourer and the R 1200 CL luxury cruiser make their debut at the Intermot Show. The record annual production of 93,010 units marks BMW’s superior position as the largest motorcycle manufacturer in Europe.
2003 In response to high demand, BMW introduces the production version of the R 1150 R Rockster design. Boxer models are equipped with dual ignition, and the “BMW Motorrad Boxer Cup” moves to the United States of America for the first time, with the first race of the season taking place at Daytona. 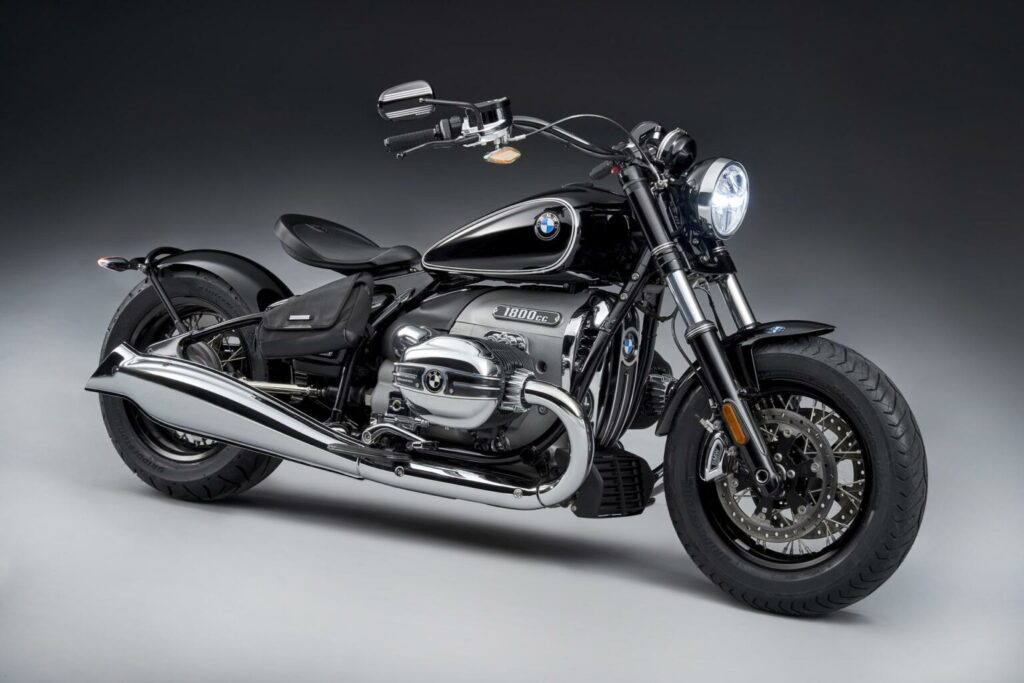